Successful development of a nano-scale dispersion and mixing technique, high-shear processing, for fabrication of nano-composites

Dr. Hiroshi Shimizu (CEO of HSP Technologies Inc.) has developed a new polymer-blending technique using high-shear flow field, and succeeded in making miscible-polymer blends with nano-dispersion structures, when he was working in Advanced Industrial Science and Technologies (AIST). In this work, he has , for the first time in the world, realized nano-dispersion structures in polymer blends with a high-shear processing technique but without any additives; the dispersed domain sizes obtained are over smaller than the previous limit value. Furthermore, he found that the nano-structures can remarkably enhance the mechanical properties of the blends. The method is also considered to be useful for inorganic and/or organic dispersants such as carbon nanotubes, nano-particles, layered silicate, etc. and thus can be applied to medicines and cosmetics.
As shown in this figure, the feedback type screw loaded in the high-shear extruder can apply some external fields such as shear flow, elongation flow, and pressure, to the sample. 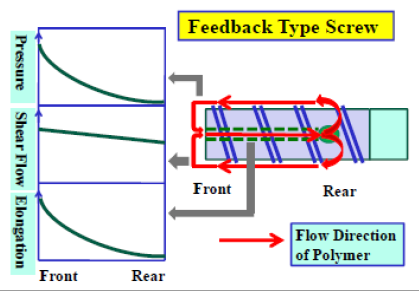 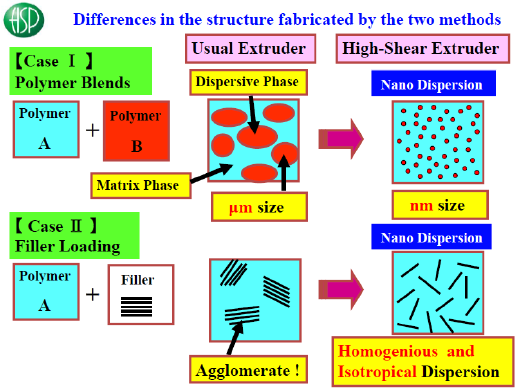 The high-shear extruder loaded with the batch type of screw can prepare nanostructured materials almost 1 kg per day. Then, our company succeeded in development of the high-shear extruder loaded with the continuous type of screw for mass production in collaboration with Toshiba Mashine Co. (press released on 25th April, 2014). The extruder for mass production can prepare up to 50 kg per hour at present. Two different type of screws are shown in the following figure. 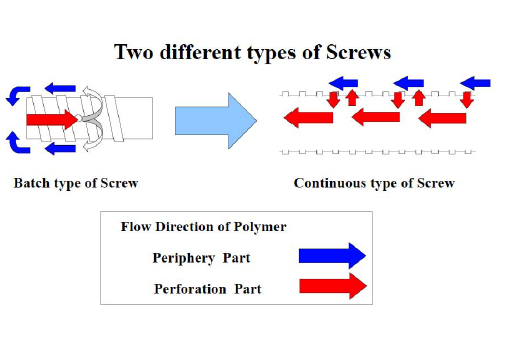 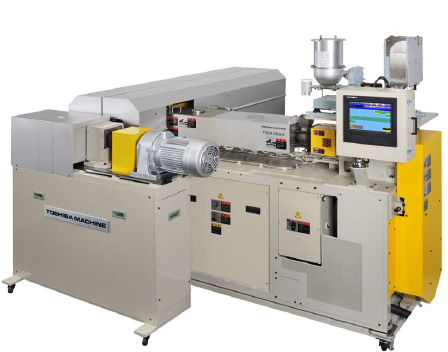 A photo of high-shear extruder loaded with continuous type of screw for mass production, which offered by Toshiba Machine Co.